A logical question that people frequently ask is “Do Air Purifiers Also Cool?” or Do air purifier cool air? This is a valid question . Air purifiers can never be the substitutes for fans or air conditioners. An air purifier compulsorily has an inbuilt fan and circulates air alright so it seems as though it may also be cooling the surrounding air. So, we’ll try to clear the air around this question in this post. Do air purifiers make the room cold? What are your views on it if you are an air purifier user? A Blueair fan has recently been launched to cool as well as purify the air.

The answer to this question is not a definite one. Most air purifiers do not cool the room if you are thinking of cooling by reducing temperature. However, similar to fans, air purifiers increase the air circulation in the rooms. Ofcourse, if someone lets the face directly infront of the air outlet it would feel cooler. There is no provision of cooling inside an air purifier. Cooling devices have compressors and use a gas to produce the cooling. There’s a whole science behind air conditioning. Air purifiers throw out air at room temperatures so there is no question of cooling. For example, think of it this way. You are sitting in a room without a fan versus sitting in a room with a fan. The temperature and all other conditions are the same. In both cases, the measured temperature is actually the same but you feel cooler in room with the fan.

The difference in temperature is minimal with a running fan. Its more of the evaporation from our skin that is sped up. Evaporation causes cooling of the surface (read skin) from which moisture has evaporated. Evaporation of sweat causes the body to cool down.

I haven’t seen many air purifiers which can literally cool the air except for Dyson Cool Link air purifiers. Hence in this case air purifiers also cool. Another range of models from Dyson can also heat up. Although here too don’t think it would function as an air conditioner.

In some air purifiers you can find a humidifier function as well. The humidifier works to bring the humidity to desired levels. A separate dehumidifier can also be useful in high humidity conditions. You must have observed how a very humid day feels very hot even though the temperatures may not be that high. This is because our sweat can’t evaporate because the air is already saturated with moisture. So, dehumidifiers remove air’s excess moisture to bring the humidity to comfortable region.

An anomaly is seen during winters when an air purifier might actually make the room feel slightly warmer. The reason is hidden in the bottom-to-top flow design adopted by most air purifiers in the market. They pull in air from the lower portion or from the sides or even from all directions in cylindrical models. The filtered air is then being projected from the upper side, which replaces the slightly warmer air at the top. The warm air is pushed downwards towards us. Warm air is lighter and tends to rise up and cooler air being heavy wants to settle down. This temperature variation forms a convection current which we often refer to as air flow. 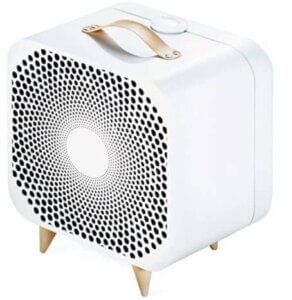 Blueair is an immensely popular air purifier maker. Recently it has rolled out the Blue Pure Fan air purifier. This model not just rids the air of the pollutants but its horizontal fan means it also gives out air like a fan. So, in a way it doesn’t make the air cold but does give out clean air at room temperature. You can check out its Blue Pure Fan review.

Let me reiterate our takeaway from all this discussion on “Do air purifiers also cool” question. You feel cooler air when your sweat is gone and due to better air flow. Even fresh air from outside may be cooler than indoor air. The fan inside an air purifier is not that large as a ceiling fan. So, buying an air purifier with the thought that it can dual up as a fan, is a wrong thinking. What are air conditioners, water coolers or fans there for?

Again, these are very minor effects and as such, won’t really be felt by most people. We can only suggest good air purifiers like the premiere Coway AirMega 300S which can guarantee cleaner air.

I am so excited to … END_OF_DOCUMENT_TOKEN_TO_BE_REPLACED