Every air purifier brand tries to showcase its USP whether or not there really is any. If nothing else works, then they don’t even shy away from coming up with fancy sounding technical terms to lure the gullible. Blueair air purifiers especially their Classic series has their own filtration technology they call HEPASilent. In this post, I’ll explain what HEPASilent technology is. From the huge traffic that this post of mine sees, I am sure it indeed is a burning question. Blueair air purifiers owe their noiseless operation to their less dense (or rarer) HEPA filters. The Blue Pure 211 and the likes in the category are the bestsellers. More endowed and stylish, Blueair Classic Air purifiers start from $380 onwards. A little on the higher side of cost, but surely they are worth it. A part of their body is made of steel making them look special.

WHAT IS HEPASILENT TECHNOLOGY?

HEPASilent technology is a combination of efficient air filtration and silent operation. TRUE HEPA filters bring along 99.97% air cleaning efficiency by default. Blueair justifies their HEPASilent filtration to be way better than the denser HEPA filters. A conventional HEPA filter works on the principle of mechanically arresting the airborne particles. The dense layer of filter media makes the particles to make impact on the filter surface and eventually stick on a filter layer in due course.

Blueair HEPASilent technology uses both mechanical as well as electrostatic filtration. What this means is that the HEPA filter has lesser responsibility to shoulder for filtering the air. The electrostatic chamber shares the burden by charging the dust particles. The charged particles then easily get pulled to the filters as if they are a magnet to them. 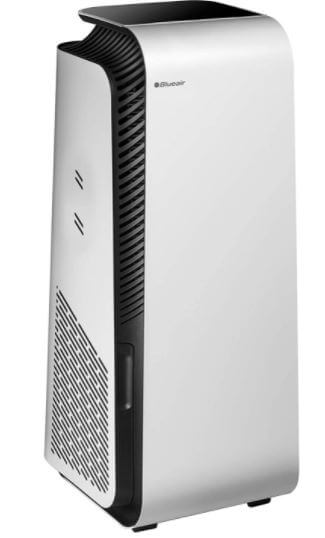 Its important to understand the working of any technology to clear the clouds of mystery around it. The HEPASilent filtration technology has a two step process-

1. A Charging Area For Incoming Particles.

Here, an Ionizer flushes a charging chamber with negative ions. The dust particles or microbes also acquire charge on colliding with the anions.

2. The Charged Particles Are Filtered Out.

While smaller particles below 1 micron experience greater impact for the electrostatic forces. They get attracted to the filter media and stick to its surface. The HEPASilent technology uses both these forces. This translates to an efficiency of 99-100% filtration of particles as small as 0.1 microns.

Besides the HEPA filter and the electrostatic charging, there’s an additional activated carbon filtration stage as well. The carbon filter removes chemicals, organic gases and odors from the air. All these are those pollutants which are immune to the HEPA filer’s mechanical obstruction.

Is HEPASilent Better Than True HEPA? 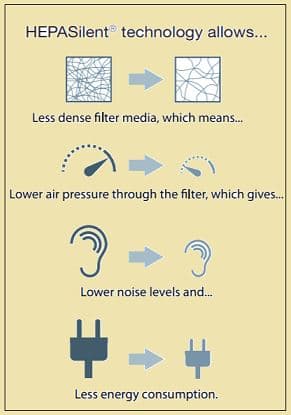 Blueair doesn’t clearly mention whether or not this HEPASilent technology involve TRUE HEPA filters. They however quote the same efficiency that is 99.97% which is synonymous with True HEPA filters. Blueair says their filters are less dense which translates into greater airflow speed. Greater airflow is always a good thing to have. This is the reason why all Blueair Classic air purifiers have an excellent ACH of 5 (ACH=5).

Below is a summary of why HEPASilent is touted to be better than having just a true HEPA filter. The HEPA vs HEPASilent showdown is tilted in favor of the latter. Blueair Classic Air Purifiers are somewhat costly devices, you can check if the price fits your budget.

Blueair HEPASilent filters combine the impact of mechanical HEPA filtration and electrostatic charging. Whatever particles could have escaped the filter are taken care by the electrostatic charge. How? By charging the dust particles, they stick to the filter like pins are picked by a magnet. Consequently, the filter need not be very dense one to maintain 99.97% efficiency.

HEPASilent imparts a higher Clean Air Delivery Rate as compared to a impaction-reliant HEPA only filter.

2. REMOVES PARTICLES AS SMALL AS 0.1 MICRONS

This is an important difference between HEPASilent and HEPA. A H13 grade True HEPA filter can filter particles sized above 0.3 microns. As HEPASilent technology does not rely on just mechanical forces, such filters can trap even smaller particles than a TRUE HEPA filter. Allegedly, Blueair claims its filters catch particles down to 0.1 microns in size such as viruses, bacteria and microplastics. Needless to mention, it also filters the larger particles of dust, pollen, lint, smoke and pet dander.

These tiniest of particles may be present in high density as during extraordinary polluted days.

PARTICULATE MATTER IN BREATH MAY LEAD TO-

We’ve been mentioning it all over this article how Blueair Classic air purifiers use a less dense HEPA filter. Still, their filter maintains an even better air filtration performance than a True HEPA filter. As their filter offers lesser resistance to the path of air, there is less noise as air passes through easily. Also, the air velocity is not decreased owing to a dense filter.

Another angle of looking at it is that the air purifier is able to perform optimally with lower fan speeds as well.

4. RIDS AIR OF BACTERIA AND VIRUSES 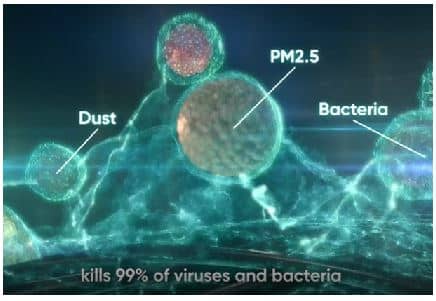 The Blueair HEPASilent technology kills airborne bacteria and viruses. The filter traps the microbes and the electric charge neutralizes them. Blueair Classic 280i and 480i remove 99.99% of the most common disease causing bacteria and viruses. These include the H1N1 swine flu virus, Typhoid causing E. coli, and Enterovirus. However, Blueair doesn’t take responsibility for the Chinese Corona Virus.

All Blueair air purifiers are ENERGY STAR certified, consuming less energy than an incandescent lightbulb. Relax, I am talking about the lowest fan speed here. Were you shocked for once? Lol! Do not think much about your energy expenses to rise. Air purifiers are not energy guzzlers.

Blueair Classic series (with model numbers ending in an ‘i’) is their smart range of air purifiers. These are especially useful against Asthma and allergies. The Blueair HealthProtect series is the latest range of their smart air purifiers using HEPASilent Ultra technology. No doubt, they feature in the Best air purifier for allergies list big time. Having a quiet air purifier which can rid us of the most variety and percentages of pollutants, is the preferred choice.

Blueair Classic and now the newer HealthProtect air purifiers are very silent as explained above. Since the HEPASilent technology involves charging of dust particles, it has an ionizer. The company prefers to keep quiet on the ozone generation part which would get formed no matter what. This is an important factor in the HEPASilent Vs HEPA comparison. 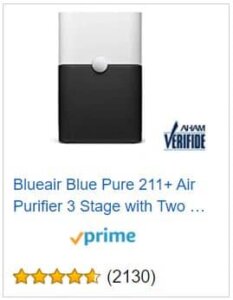 I am so excited to … END_OF_DOCUMENT_TOKEN_TO_BE_REPLACED