In this Coway vs MI air purifier post, you’ll know some subtle differences between these path breaking air purifiers. 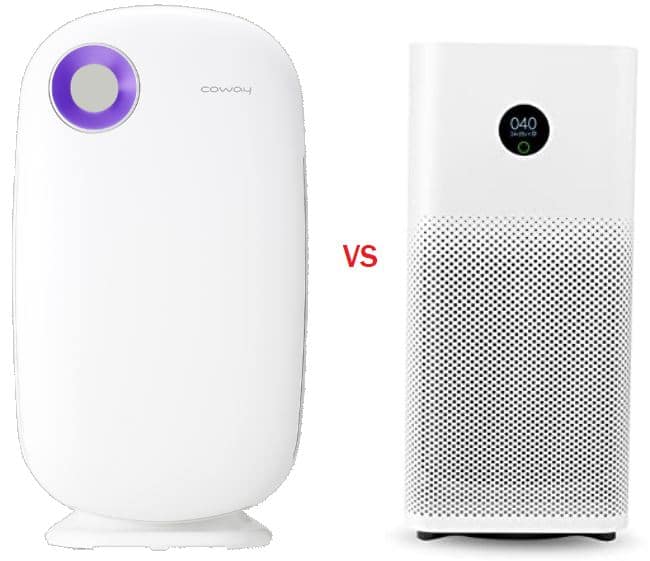 To compare these two air purifiers, I would be taking up one specification at a time. For your convenience I’d also be listing out a summary table for a quick glance.

Price-wise there cannot be any comparison. Coway Sleek Pro has its price fluctuating all round the year between 13,000 – 17,000 INR. Sleek Pro model is soon to be discontinued if not already. Coway’s newest model is the Airmega 150 with the same coverage area as the Sleek Pro. The good thing is that it has a lower price bracket than the Sleek Pro which makes it more affordable. The MI air purifier 3 on the contrary has a fixed price of just a tad below 10 Grands. It is arguably a very cost efficient air purifier. If we see its features then you’d find the Coway Sleek Pro and the Airmega 150 lacking. Here I am talking about the digital PM2.5 display, mobile App support, among other things.

Coway is a well-known Korean company. While MI is a Chinese brand. Considering the fact that China is India’s enemy No.1 ,I would avoid its products at all costs. Still for the sake of comparison, I would remain unbiased throughout the post.

Coway Sleek Pro has comfortable press buttons which produce a short jingle when pressed. Airmega 150 has touch type embossed buttons. MI air purifier 3 has a touch screen as well as WiFi and APP connectivity. From security point of view, I would not download or install MI App if I were you.

This is one feature I always rue its absence in the Coway Sleek Pro air purifier.  Even the Airmega 150 doesn’t have it. Not sure why the company is not considering to include this. I am sure in some upcoming models, Coway would seriously consider adding this feature.

Coming to how the real-time pollution display works in the MI air purifier. I am mighty impressed with the accuracy and specifically the sensitivity of the particle sensor. I’ve tried a few times by lighting match sticks, and the particle count does go up quickly. Even by the closing and opening of doors, the sudden change in air pressure changes the PM2.5 in the otherwise sealed (nearly) room.

As you can see Coway is bigger then the MI Air purifier 3. In terms of weight too, Coway weighs 5.9 Kilos as against MI’s 4.8 Kgs. Overall, MI air purifier 3 is more portable and light. In terms of stability, both air purifiers are equally stable. Coway Sleek Pro may look like it may topple anytime, but its just an illusion.

You do not find any handle or niche to lift MI air purifier up. Its so light and compact that you can wrap your arms around it to lift it up. Coway has a niche at the top back to put your fingers in for lifting.

Even though the Coway Sleek Pro is bigger in size yet MI air purifier 3 scores better in this area. The MI Air purifier has a specially well-designed fan inspired from jet-engines. This creates a powerful air current in the room. Also, MI air purifier has a round filter which takes in impure air from three sides. Contrast this with Coway’s rectangular filters which pull the air from two crevices on the sides of the air purifier body.

On this parameter too, MI Air purifier steals the show. As I already mentioned above that the MI air purifier has an excellent air circulation thanks to its powerful fan. This makes it capable of cleaning more air per hour. For your reference, MI has a CADR of 380 m³/h while Coway AP-1009 has a CADR of 303 m³/h.

Whatever air the Coway Sleek Pro cleans, it does so excellently. Users of Coway notice a marked improvement in not just air quality but also the foul smells are gone. The air smells different, which people living in cities seldom experience. Its the smell of freshness and purity. In terms of filter quality, Coway wins hands down. It is not to suggest that the filter used in MI air purifier is any inferior. It is a H13 grade filter and is of international standards. But, it is the overall performance and the impact of air quality that Coway air purifier produces.

I was not impressed with MI air purifier’s ability to remove odors. Be it kitchen odors while the food is being prepared or the smell of crop stubble burning in nearby states. I have never been satisfied with MI air purifier in this aspect. This was with their H12 grade HEPA filter which came inside the MI air purifier 2S model. Now the new MI air purifier 3 has a much improved HEPA filter of H13 grade. Not just this it has an activated carbon filter layer as well. This makes it perform very well against particulate as well as gaseous pollutants. Overall, from the point of view of air cleansing, it is good. Bringing down pollution levels quickly is one of its good things worth mentioning. 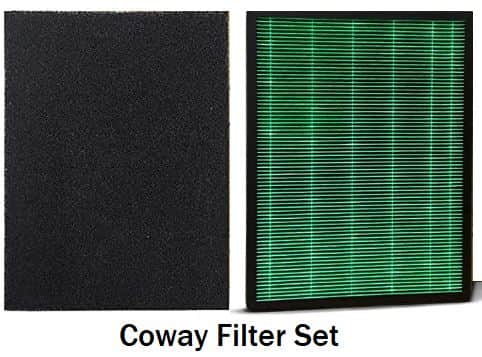 Coway Sleek Pro and Airmega 150 has a pair of filters that are clubbed together when put in the air purifier assembly. These are the anti-flu HEPA filter and the carbon filters. Coway’s HEPA filter is coated with a special compound extracted from some native plants. This green coating renders viruses ineffective by breaking their cell walls. In times of this virus pandemic, it is a very good feature. Coway’s replacement filters cost much more than MI. This Coway vs MI air purifier war is getting heated up right?

MI air purifier 3 gets noisy at highest fan speed. My mother can’t even sleep with the air purifier ON, now you’d slowly understand why Coway is so popular. What good is an air purifier’s coverage if some light sleepers can’t sleep? For this, we put this Turbo mode on our MI air purifier before going to sleep. When its time to go to bed, the Sleep Mode is the best deal.

Coway Sleek Pro air purifier offers more control over the fan speed. It allows you to choose from 4 speed levels. Speed level 1, Level 2, Level 3 and a Turbo mode. On the other hand, speed setting 3 is the maximum fan speed setting for the MI air purifier.

What is the purpose of the Sleep mode in air purifiers? It is there so that the air purifier lights and fan noise does not interrupt your night’s sleep. The air purifier operates at its lowest fan speed so as to make the least noise. Also, its LED lights are dimmed or completely shut-off in this mode. An air purifier running in Sleep Mode is akin to a compromised efficiency as the fan at a very low speed cannot remove the pollutants well.

Coming to the applicability of Sleep mode in the Coway Sleek Pro. This air purifier is already so silent that its operation does not hinder the family’s sleep. For the air quality indicator lights there is a MOOD lamp to turn them off. Problem solved! You need to not that you can run your Coway Sleek Pro at max speed in Turbo mode while sleeping comfortably. Yet another reason to go for this masterpiece!

Coway Sleek Pro air purifier does not have a Timer.

MI air purifier is a smart air purifier replete with WiFi and mobile application functionality. It can be very well controlled through the APP once it is paired with the air purifier. The APP shows statistics of real-time pollution, and can do all that the touch buttons on the air purifier can do. You can voice control it with ALEXA as well.

Coway air purifier lacks all these features. But, what is the use of all these features when the MI application leaves you vulnerable at the hands of China’s sinister motives of stealing your data ? It is for a reason that Chinese APPs are being flagged for data theft and privacy concerns worldwide.

The Coway Air purifier consumes more power than your MI air purifier. Its all in the excellent fan design of the latter. The difference however is not very tangible. One would not even notice any difference in their monthly bills. Just for the sake of brevity, Coway consumes 49 W and MI air purifier eats 38 W.

Coway offers a 5 years warranty on the fan motor and 1 year warranty on electrical parts. Any physical damage to the air purifier body is not covered in warranty. MI offers only a 1 year peace of mind. There is no comparison in the level of peace of mind you can enjoy if you choose Coway over MI air purifier. The reason for this is simple. Coway has one of the best after sales support. Their customer care representatives are very professional and helpful.

MI is nowhere to be seen should you face any issues with your air purifier. Just like any other Chinese product, if it works well its your good luck, if it doesn’t still its your own luck.

Coway Sleek Pro Air Purifier is a simple air purifier devoted to excellent air cleaning. Coway has this knack of keeping things as simple as possible. At the end of the day, an air purifier must produce perfectly clean air. It hardly matters if it allows you to control it with an APP or voice assistant or not. MI air purifier, although very feature studded for its price, lags behind in the noise and air cleaning part. Also, MI being a Chinese company is bound to have lost the favor of patriotic Indians.

For the rare case of Coway users who’ve faced some issues with their air purifiers, they have a common thing to say. They all agree that Coway’s response to their issues was very well received and helping. What more can a customer ask for? A product par excellence and that too from the World leader in air purifiers, that’s Coway for you.

Welcome to the Coway … END_OF_DOCUMENT_TOKEN_TO_BE_REPLACED

I am so excited to … END_OF_DOCUMENT_TOKEN_TO_BE_REPLACED