However, looking at Vista 200 as itself, the low price may be your greatest encouragements to buy it. From a coverage area standpoint, there is only a select use-case for using this air purifier. Only rooms or spaces measuring about 160 – 170 sq.ft. fit the bill. If you are looking for an air purifier for large rooms, the Levoit LV-H134 is an ultimate machine. 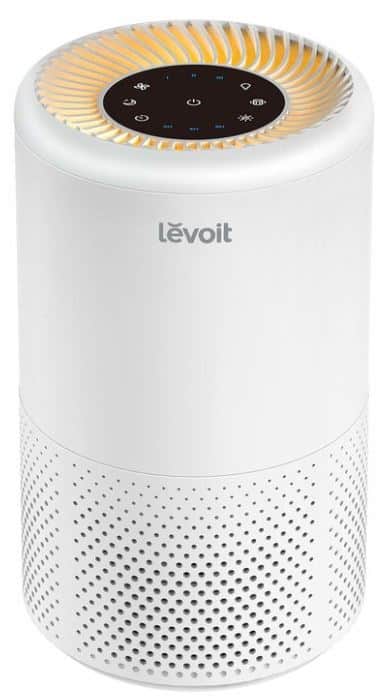 I personally don’t favor buying very small air purifiers. For those who do buy, I don’t think there’s any bigger limitation than the budget driving their decision. If it is so with you too, then I would stay mum.

Levoit Vista 200’s price is below $90 and you can check its current price below. It is a much loved low budget air purifier. Whenever the company introduces a newer model, it decreases the price of the older model. As compared to its upgrade, the Core 300, there’s too little price difference.

With Levoit Core 300, you get the option to buy custom filters. I have highlighted this feature prominently in my Levoit Core 300 Review. With Vista 200, you lose this customization. In totality, if you prefer saving $10 by favoring Vista 200 over Core 300; you lose out on coverage area, fan power and  performance. Compare the two models and you’ll see where I am coming from.

I think I’ve discouraged you somewhat by showcasing the advantages of buying Core 300. If you are actively searching for a small room air purifier, you may also have stumbled across the Levoit LV-H132 model. For your information, it has become a somewhat older model. The Vista 200 has additional features like a 2/4/8 hours Timer and Sleep mode. With no price difference between the two, I would prefer to buy Vista 200.

Vista 200 has a matte finish and the looks are even more minimalist than the LV-H132. A lot of the black detailing has been removed to give the Vista 200 an even more refined personality. Now lesser issues with fingerprints, smudges, and noticeable dust sticking to the purifier surface.

Lets discuss one design improvement that the Vista 200 has over the LV-H132 . The top face now has a larger grill with a resulting greater outward airflow. The intake grill now reaches nearly up to a full 50% of the lower body. This design improvement may be behind the vast improvement in the coverage areas of the two air purifiers. Contrast the 161 square feet coverage of Vista 200 with the only 89 sq ft of the LV-H132.

The filters that these two use is nearly the same. Just that the H-132 has a washable pre-filter.

Levoit Vista 200 carries forward the legacy of the likes of LV-H132. No stark differences in design or capabilities worth mentioning again. Being compact and light-weight are two of Vista 200’s USPs. One compliment becomes imperative to pass to Levoit here. The company makes air purifiers which strike a chord with the buyers just by their looks. Vista 200 is no different. Its white body radiates a spectrum of colors when light reflects from its surface.

A night light coming out from the top grill gives an even more serene look to the air purifier. You can set the brightness level between two levels. If you do not need the light, you can even turn it off. The edges are rounded-off beautifully and the air purifier looks like a large candle from a distance.

Just like other cylindrical models, Vista 200 too has a 360° air-intake approach. The impure air is sucked in through the bottom portion via the perforations. The cleaned air is blown out from the top face. The top face also has the control panel with touch buttons along the periphery. A central button for Power ON/OFF and blue LEDs to show the fan speed and Timer.

Levoit Vista 200 is truly a power efficient air purifier. Run it day in and day out and you won’t fret at the power bills at all. It consumes just 15W which is the maximum rated power. Vista 200 is powered by a 12V AC adapter. The port of the adapter is a universal one and this makes it easy to find a substitute. Another thing to note is that this air purifier does not have automatic restart on power resumption. Hence, you can’t leverage use of smart plugs with it.

Levoit Vista 200 is a very compact and small air purifier. Weighing in at just 5 pounds, it hardly needs any effort in lifting or moving around the house. Another physical attribute is that it does not occupy much floor space. 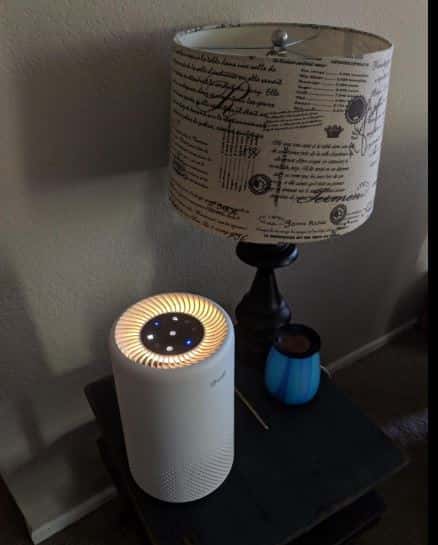 Levoit Vista 200 is purportedly capable of cleaning a radius of 160 sq.ft around it. The CADR is rather small at just 50 CFM. Hence, the air purifier can only manage to clean a small room’s air. The ideal way of using small air purifiers is to keep them proximal to yourself or the inhabitants.

For using the air purifier to clean a larger area, there’s a neat way to do it. You can simply seal-off the already cleaned rooms, and move the device to another portion of the home. I do this all the time with my air purifier. So, with just a little effort, you can increase the utility of your small air purifier.

Levoit is strictly against using UV-C light in its air purifiers. This resolve is to protect the users from the harmful effects of this radiation on health. Also, some US states like California have stringent guidelines and scrutiny. 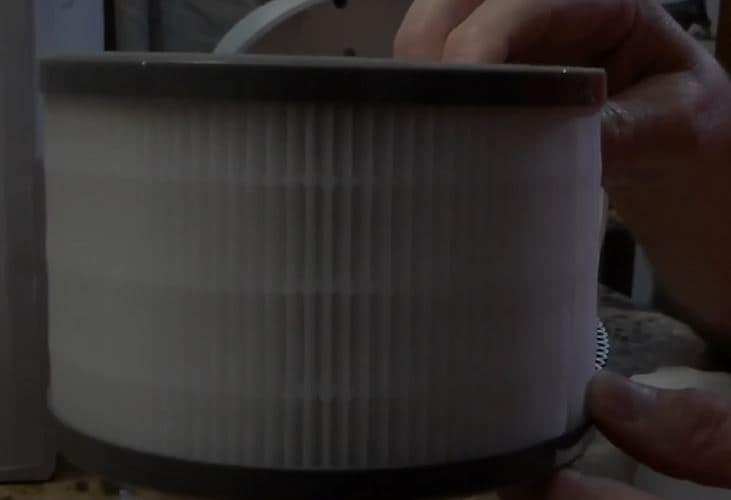 Levoit gives 3 filtration stages in all their air purifiers. Vista 200 too has a H13 grade True HEPA filter.

Levoit Vista 200 is a small air purifier. It does not move a large mass of air even at its highest fan speed. This warrants it to be silent in its operation. The company lets us the know the reason behind this whisper quiet working. There are no brushes in the fan motor which means no vibrations.

At its quietest best, Levoit Vista 200 only records 26 dB on the noise level. When you choose to run it at its top fan speed, even then it shall not make more than 52 dB noise. The low and high noise levels, both are good for a comfortable night sleep.

In summary, Levoit Vista 200 is a great looking air purifier for small rooms. Its relevance is somewhat diminished with the introduction of the Levoit Core 300. There are so many options from different companies, one tends to get confused. This Levoit Vista 200 review is my sincere effort to bring its best features to the forefront. It is designed to spend less power, so apart from being dirt cheap, its filter and power costs are low as well.

I am so excited to … END_OF_DOCUMENT_TOKEN_TO_BE_REPLACED