Levoit has recently refreshed its air purifier range with fresh looks and some new features. With the introduction of these newer models, Levoit now has an impressive lineup of air purifiers catering to all needs and price range. If you read our Levoit LV-H133 Review, you’d know of its one flaw we pointed out there. It was the presence of a cylindrical filter but the absence of corresponding air inlets in all directions, which is a requirement for a truly 360° air intake system. The Levoit LV-H134 has overcome this design flaw and sucks the air in from all sides. More such sharp analysis awaits your perusal in this Levoit LV-H134 Review.

The Levoit LV-H134 has an imposing personality and is one of Levoit’s dearest air purifiers. Recently, LV-H135 has been launched to compete against popular air purifiers from other brands. Levoit LV-H135 is a prime model pitched against Honeywell HPA300 or Coway Mighty air purifiers. Naturally, it has to be commensurate in its price with its competitors. LV-H134 is still Levoit flagship air purifier.

Levoit LV-H134 is such a powerful air purifier, it stands out from the rest of Levoit’s models. With all features except for a remote control and mobile APP, its a great air purifier. It is ideal for mid-sized rooms and gives tough competition to the likes of Blueair Blue Pure 121 in coverage area. The air intake design are similar, both take impure air from all sides. The major difference is that Blue Pure 121 is very simple in its feature set with not even a console as such. Levoit LV-H134 on the other hand has a flashy feature-rich console. Blue Pure 121 is an extremely popular model with changeable pre-filter skirting of different colors. It is a little cheaper compared to Levoit LV-H134 and ought to be so since it lacks many convenience features.

The Levoit LV-H134 is a newer model to be introduced at the start of 2020. It still wrests the crown as the costliest Levoit air purifiers around. Naturally, the flagship model is always the costliest, so it indeed is. If you look at the specifications of Levoit LV-H133, you would not see any major differences. I am sure you’d even be surprised by the price gap between the two models. So, if the far greater price or bigger size of LV-H134 does not convince you to buy it over LV-H133, you are not alone. At the current price, one can buy two LV-H133 in the price of one LV-H134 plus a spare filter. But, note that LV-H133 is a more than 3 year old model.

The Levoit LV-H134 air purifier does not have any ionizer. Ionizers are always susceptible to producing trace amounts of ozone gas. So, with this air purifier ozone and its hazards are not an issue.

Your first reactions on unboxing a new Levoit LV-H134 would be that of delight and awe, I am sure of that. No one can dislike the looks and personality of this air purifier especially when its ON. This air purifier will bring its own charm unlike some eye-sore air purifiers out there. This tall air purifier can purify the air in 1170 ft² rooms in 30 minutes and takes just 18 minutes for 710 ft² rooms (~ ACH x 3.3). I would give full marks to it on the looks department.

Levoit LV-H134 has a tower design like any other model in the LV-Hxx series. I very much like this design for its versatility. It is not without a reason that every other air purifier you see has a similar cylindrical design. Firstly, this design occupies lesser floor space which is always a welcome thing. Secondly, the air purifiers fan is able to deliver a powerful air current. Lastly, and most importantly, the cylindrical shape of filters and perforations in the air purifier body all around it make it a 360 degree intake device.

An air purifier meant to service big spaces is bound to be big in size. Levoit LV-H134 stands tall at 32 inches and weighs over 12 Kilos which is quite a handful. Thankfully, wheels are provided in this model to pull it around. I still miss the provision of any handle. The wheels roll in a linear direction and not in any. Moreover, the wheels work well only on absolute flat surfaces. They are not easy to roll on carpets etc. but still something is better than nothing.

The Control Panel is where the attractiveness of this air purifier is concentrated. I do not see any difference in the buttons or even the look of the control panel compared to LV-H133. The center of the display shows the air quality in digital format. The ambient PM2.5 particle level is shown as numbers. This numerical reading along with an LED ring which changes color to correspond to the air quality are a valuable feature.

Levoit LV-H134 has a very attractive control panel. All the functions available line up as buttons along its circular boundary. These touch type buttons make a jingle when pressed.

The function of each of these buttons is as below –

All this makes this air purifier suited for 27 * 27 foot rooms. Obviously, this would make for a very big room. An air purifier meant for larger rooms can be used for smaller apartments or office spaces.

Apart from the blue color of the buttons, there’s an additional circular LED on the control panel. This LED is meant for showing a color coded air quality feedback. If not running your machine in Auto mode, the LED color gives an indication of the ideal fan speed. The more polluted the air is, the faster the fan should run or made to run.

The numerical air quality indicator constantly toggles the reading in accordance with the pollution. In general terms, readings less than 40 means perfectly clean air. If the LED color does not change or is not in sync with the air quality denoted by the numerical pad, there may be a problem. Check for the cleanliness of the sensor, its the most common reason for such discrepancies. You can check how users have appraised the Levoit LV-H134 Review.

Many air purifiers talk of generating white or pink noises which facilitate sleep. As a light sleeper myself, the slightest sounds wake me up. So, there’s no question of me being able to sleep off with a ‘jet engine’ gargling by my bedside. But, Levoit LV-H134 has a unique adjustment made with the fan design. This cuts the noise level greatly.

20 dB is what a whisper or rustling of leaves would make. So, 25 dB is just marginally louder. 40 dB is the noise levels in a library. While 50 dB is the noise of a light conversation at home.

Levoit says its filters can last around 6 – 8 months depending on use and pollution. Some air purifiers use ultraviolet light to kill pathogens. Levoit air purifiers use just the mechanical particle trapping and electrostatic filtration properties of its HEPA filters. So, there is no risk of ozone contamination. 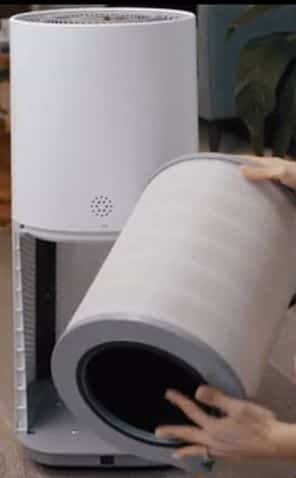 The composite filter is cylindrical and hosts three layers.

This air purifier model uses the same filters as the LV-H133 model. In comparison to the price of LV-H133, the cost of the replacement filters was too much. That price would not look staggering in front of the LV-H134’s price.

I would have liked an added WiFi connectivity feature at this price tag or a remote control mechanism. The Levoit LV-131S has this additional WiFi capability. However, the Pros are too many and outnumber the Cons by a great margin. Levoit LV-H134 is a great air purifier you won’t repent buying. It moves a great deal of air and looks great. Its convenience features lack WiFi or APP functionality and has all commonly found features. Having a numerical air quality display is a great value addition. Most air purifiers in USA still don’t have this feature, think this trend will soon change. Trust me, the satisfaction of seeing the indoor air quality in real-time is something you should try too.

I am so excited to … END_OF_DOCUMENT_TOKEN_TO_BE_REPLACED